Mariana Ortega's main areas of research and interest are Women of Color Feminisms, in particular Latina Feminisms, 20th Continental Philosophy, Phenomenology (Heidegger), Philosophy of Race, and Aesthetics.  Her research focuses on questions of self, identity, as well as visual representations of race, gender, and sexuality. She has published in various journals including The Journal of Speculative Philosophy, International Philosophical Quarterly, Critical Philosophy of Race, Hypatia, Radical Philosophy Review, and philoSOPHIA. She is author of In-Between:  Latina Feminist Phenomenology, Multiplicity, and the Self (SUNY, 2016) in which she presents a theory of multiplicitous selfhood informed by women of color theorizing, in particular Latina feminisms, and Heideggerian phenomenology. She is co-editor with Andrea Pitts and José Medina of Theories of the Flesh, Latinx and Latin American Feminisms, Transformation and Resistance (Oxford University Press 2019); she is also co-editor with Linda Martín-Alcoff of the anthology Constructing the Nation:  A Race and Nationalism Reader (SUNY, 2009).   Her current research is at the nexus of aesthetics, photographic theory, race, and the epistemology of ignorance.   She is the founder and director of the Latina/x Feminisms Roundtable (formerly the Roundtable on Latina feminism), a forum dedicated to discussions of Latina/x and Latin American feminisms. 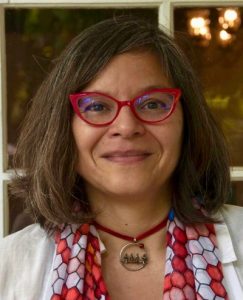